Bring a saucepan of boiling salted water to a boil. Add the fennel and simmer until crisp, yet almost tender, 3 to 4 minutes. Let cool. Preheat the broiler and adjust the shelf so that it is 4 to 5 inches from the heat source.
Chop the feathery fennel tops. Reserve 1 tablespoon. 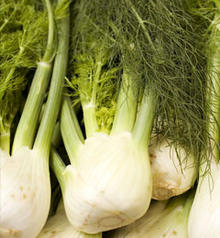