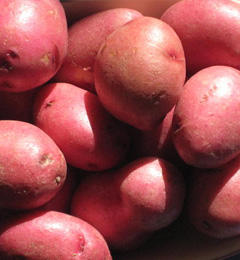 Place the potatoes in a large saucepan and cover with water. Add the salt and bring to a boil. Reduce the heat to medium low and cook, stirring occasionally, until the liquid has evaporated and the potatoes are covered with a light dusting of salt, about 40 to 45 minutes.

In the meantime, in a bowl, combine the garlic, chives, parsley, thyme, green onions, butter, olive oil, salt and pepper until well mixed. Place the mixture in a saucepan and heat until the butter is melted.

Toss the potatoes with half of the herb butter mixture and place on a baking sheet. Bake in the middle of the oven, shaking occasionally, until the potatoes are crisp and golden, about 15 to 20 minutes.

Remove from the oven and toss with the remaining herb butter. Season as needed with salt and pepper and serve.