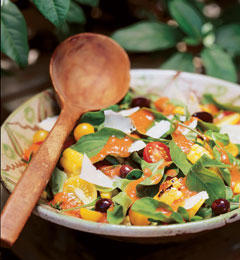 TO DRINK: Arneis or Fumé Blanc

Grill the corn and peppers 4 inches from the coals, turning occasionally, until the skins of the peppers are black, the corn husks are black, and the corn kernels are light golden when the husk is pulled back, 6 to 10 minutes. Remove from the grill. Transfer the peppers to a paper or plastic bag, close tightly, and let cool for 10 minutes. Let the corn cool.

Remove the corn husks and silk. Cut the kernels from the cob and set aside. Scrape the skin from the peppers with a knife. Reserve the skinned peppers separately from the corn.

In a blender, puree the peppers, tomato, garlic, vinegar, and olive oil to make a vinaigrette. Season with salt and pepper, strain through a fine mesh strainer, and reserve.

On individual serving plates, divide the vinaigrette evenly among the plates. In a large bowl, toss together the corn and arugula and distribute onto the plates. Garnish with the olives and cherry tomatoes. Shave the Parmigiano over the top. Serve immediately.