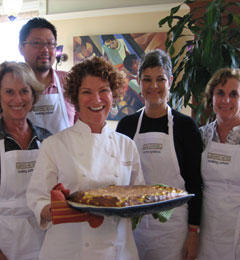 Get your guests to the table and then serve them this ingenious soufflé that bakes in ten minutes rather than the customary sixty! We used to make a soufflé like this at Chez Panisse and it really is amazing, especially when baked in a beautiful oval ovenproof platter like the popular French porcelain platters. This is a great main course with salad—or first course.

Warm the olive oil in a large skillet over medium-high heat. Add the leeks, thyme, and salt and pepper to taste. Reduce the heat to low and cook, stirring occasionally, until the leeks are soft and just starting to turn lightly golden, 40 to 45 minutes. Remove from the heat and let cool.

Pour the half-and-half into a saucepan and bring it almost to the boiling point.

Meanwhile, melt the butter in a heavy saucepan over medium heat. Add the flour and whisk 1 to 2 minutes. Add the scalded half-and-half to the flour mixture, stirring rapidly with a whisk. Cook for 3 to 4 minutes, until the sauce is smooth and thick. Add salt and pepper to taste.

While the oven is heating, place the egg whites in a clean bowl and beat until they form stiff peaks. Fold half of the whites into the cheese mixture with as few strokes as possible. Then fold in the remaining whites. Pour the mixture onto a generously buttered 18-inch oval ovenproof dish (or two 12-inch ovals). Sprinkle the top with the remaining 1/2 cup Parmigiano. Bake on the top shelf of the oven until puffed and well browned, 10 to 14 minutes.

P.S. Did You Make This Recipe? I’d love to see it -- tag #WeirCooking when posting a photo of your recipe on Instagram and make sure to follow me, @chefjoanneweir