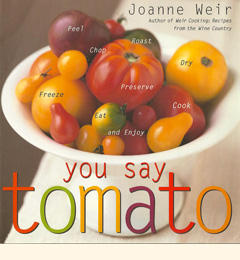 Blacken tomatoes on a piping hot outdoor grill, chop and combine with red onions and basil oil to make a salad.  After you grill the steaks, top with the tangy salad and serve. The oil can be made a day in advance but the steaks and tomatoes must be cooked at  the last moment.

Cut the tomatoes in half crosswise and scoop out all of the seeds. Place the tomatoes, cut side down on paper towels and let drain, 1 hour. In a small saucepan, combine the chopped basil and 1/4 cup olive oil. Heat over low heat just until the oil sizzles. Remove from the heat and let sit until cool, 1 hour. Strain and discard the basil.

Heat a charcoal grill. Brush the cut side of the tomatoes with 2 tablespoons basil oil. Place on the grill, 3" from the heat source and grill until the flesh blackens, 4 to 5 minutes. Turn the tomatoes and char on the other side, 1 minute. Remove . Cut the tomatoes into 1" chunks and place in a bowl. Add the basil oil, red onion, vinegar, and thinly sliced basil. Season to taste with salt and pepper.

Oil the steaks and grill on one side until golden brown, 4 to 5 minutes. Turn the steaks, season with salt and pepper and continue to cook until medium rare, 4 to 5 minutes. Remove from the grill and place on individual plates. To serve, top with the charred tomato salad and serve immediately.