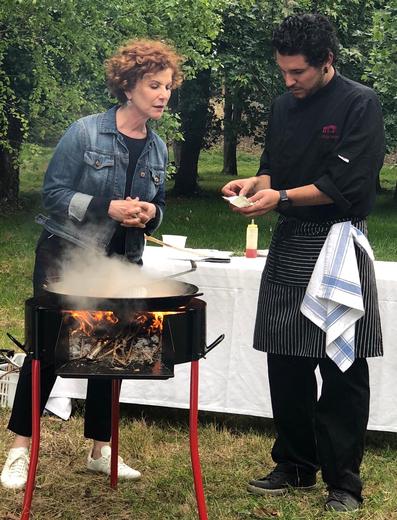 For a collection of tips on paella-making which I've gathered from my Spanish friends, click here!

Ingredients for paella begin with the rice, but you can include almost any vegetables and protein you like!  Here are the links to more of my favorite options:

Paella for Two with Chicken and Shell Beans

Paella with Chicken, Shellfish and Chorizo

Heat the stock with the saffron and the halved onion.  Cover and simmer 10 minutes.  Remove the onion with a slotted spoon and discard.

Bring the chicken stock and 2 teaspoons salt to a boil and add it to the paella pan.  Simmer briskly over high heat, stirring occasionally for 8 minutes.  The paella should be boiling very hard.  Add the clams distributing evenly throughout the paella.  Reduce the heat to low and continue to cook until the clams are open and most of the liquid had been absorbed, 5 to 6 minutes.  This 5 to 6 minute step can also be done in the oven.

Add the squid by pressing it into the rice and continue to cook 1 to 2 minutes until the squid is almost opaque.

Sprinkle the peas onto the top.  Drizzle the remaining 2 tablespoons olive oil in a spiral pattern over the top of the paella.  Increase the heat to high and cook, undisturbed, for 2 minutes to form a light golden crust on the bottom of the pan.  To check, use a spatula to see that it is sticking slightly and golden brown on the bottom.

Place a piece of parchment over the paella. Let it sit off the heat for 5 minutes before serving.

To serve, garnish with lemon wedges.

Preheat an oven to 400F.  Place the tomatoes cut side down on an oiled baking sheet and roast for 30 minutes.  Remove from the oven and cool.  Remove the skin and discard.  Mince the tomato.

Warm the olive oil in a frying pan over medium high heat.  Add the onions and cook, stirring occasionally, until light golden and caramelized.  Add the tomatoes and garlic and cook, stirring, until the mixture is a paste, about 3 to 5 minutes.  Set aside.