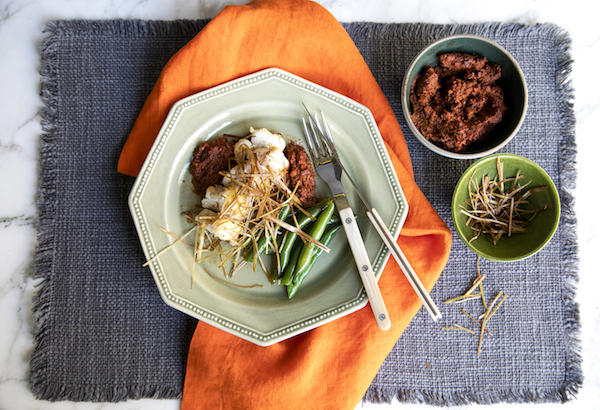 With a knife, make a few incisions about 1-inch apart on each monkfish fillet cutting deeply into the fillet but not cutting all the way through.  Place the monkfish in a bowl and add the olive oil, lemon zest, salt and black pepper.  Spread the marinade onto all surfaces.  Let sit 30 minutes.

In the meantime, place ½ cup of the olive oil in a small saucepan along with the garlic cloves. Cook over medium low heat until soft and light golden, about 10 minutes. Remove the garlic and reserve.

Place the dried chilis and crushed red pepper in a saucepan with 1/2 cup water and 3 tablespoons of the vinegar. Bring to a boil over high heat, reduce to low, cover, and simmer slowly for 10 minutes. Turn the heat off and let steep 30 minutes. Strain peppers, discard seeds and liquid, and finely chop them.

Heat 1 tablespoon of the oil in a small skillet and fry the bread until golden. Transfer to a food processor.

Add another 1 tablespoon oil to the pan and fry the almonds until golden, 1 to 2 minutes. Add the almonds to the processor with the peppers, garlic, tomato, and pimenton. With motor running, gradually pour in the remaining 3 tablespoons olive oil, 2 tablespoons vinegar, and salt and pepper, and puree until smooth.

Preheat a cast iron pan over medium high.  Add 2 tablespoons of the olive oil and fry the monkfish until it goes from translucent to solid white, about 5 minutes per side.  Remove from the pan and discard the lemon.  With a knife, continue to cut all the way through.

To serve, place the a pool of romesco on each plate and fan the slices of monkfish onto the top.  Garnish with Frizzled Leeks.

Cut the leeks across into 2-inch pieces.  Thinly slice lengthwise into matchsticks.  Cut the pieces into 1/8-inch strips.

Heat ¼-inch olive oil in a small deep-sided saucepan over medium high heat. Add the  leeks and cook, stirring occasionally until golden and crispy, 3 to 4 minutes. Remove with a slotted spoon and drain on paper towels.