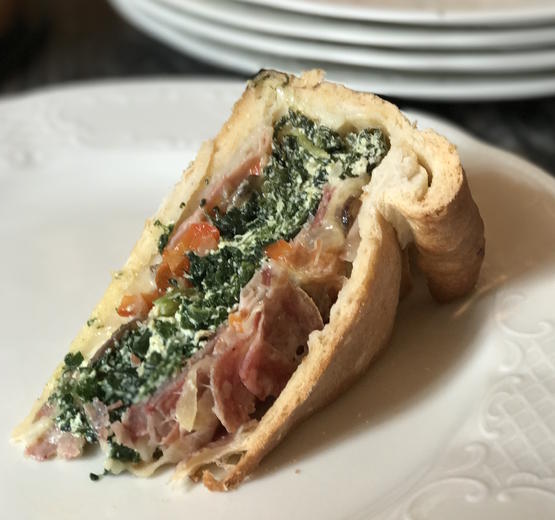 Dough: Place the yeast, flour and salt in bowl of the food processor. With the motor running, add 1 1/4 cups warm water slowly. Quickly add the olive oil and process until dough is smooth and evenly soft, about 45 seconds. If the dough is dry and rough and doesn't form a ball, add a tablespoon or two of water.

Place the dough in oiled bowl and turn the dough to coat it with oil. Cover tightly with plastic wrap and set aside in warm place, about 70 to 75F, until double in volume, 1 hour.

Filling: Heat a large skillet and toss the greens with tongs until wilted. Squeeze in a towel to remove the excess moisture. Chop the spinach coarsely and set aside.

Heat 2 tablespoons of the olive oil in frying pan over medium high heat and saute mushrooms and garlic until liquid from the mushrooms has completely evaporated, 15 minutes. Season with salt and pepper, remove from the pan and set aside.

Add the remaining 2 tablespoons oil to the pan and cook the peppers and onions until soft, 15 minutes. Add to the mushrooms and toss together. Remove from the pan and set aside. In a bowl, stir together the ricotta, egg and greens. Season with salt and pepper and set aside. Combine the mozzarella and fontina in another bowl and set aside.

To assemble: Place a 10-inch springform pan on a baking sheet and brush the inside with 1 teaspoon olive oil. Punch down the dough and divide it into two pieces, one which is three-quarters the volume and the other is one-quarter. Roll the larger piece into a 16-inch circle. Transfer to the springform pan and line bottom and sides with the dough so that it comes up and over the edges. Preheat oven to 400oF. Place one-quarter of meat on the bottom of the dough and top with one-quarter of the combined cheeses. Next, layer one-half of the mushroom, pepper mixture on top of the cheese. Sprinkle with one-quarter of the combined cheeses. Place another layer of the meat on top. Spread the wilted greens mixture over the meat. Repeat the sequence ending with the meat.

Roll the remaining dough to 10-inch circle. Brush the overhanging dough lightly with water. Cover with the top crust. Pinch the crusts together and crimp to form a decorative edge. With a sharp knife, cut two 1/2-inch vents in the middle of the top of the dough.