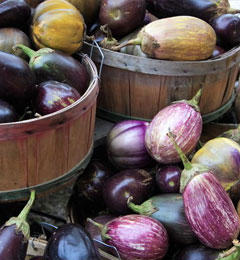 Prepare a fire in a charcoal or gas grill. Preheat an oven to 400°F.

When the grill is ready, place the eggplants on an oiled grill rack about 4 inches from the fire and grill, turning occasionally, until soft and black, 10-15 minutes. Transfer the eggplants to a baking sheet and bake until very soft, 15-20 minutes. Remove from the oven and let cool slightly.

Cut the eggplants in half and scoop out the pulp onto a cutting board. Discard the skin. Chop the eggplant coarsely. In a large bowl, combine the eggplant, lemon juice, garlic, cumin, paprika, cayenne pepper and olive oil. Mix well. Season to taste with salt and black pepper.

Place a large frying pan over medium heat. While the pan is heating, spread 1 tablespoon of the butter on one side of 6 bread slices, dividing it evenly, and place them buttered side down on a work surface. Top the slices with half of the Fontina, distributing it evenly, then spread each sandwich with one-sixth of the eggplant mixture. Top with the remaining cheese. Spread the remaining 6 bread slices with the remaining 1 tablespoon butter and place, buttered side up, on the sandwiches.

Transfer to individual plates and cut in half on the diagonal. Serve at once.