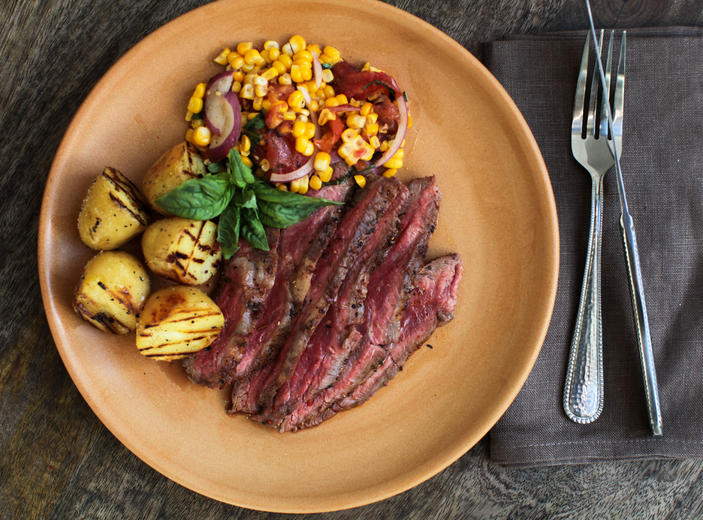 Pair this with a Cabernet Sauvignon from Washington State!

In a small bowl, combine all of the ingredients.

Heat a charcoal grill or place a cast-iron ridged grill over medium heat. Brush the steak well with oil and coat the steaks on all sides with the dry rub. Set aside for 15 to 20 minutes.

Cut the tomatoes in half crosswise and scoop out all of the seeds. Set aside. In a small saucepan, combine the chopped basil and 1/4 cup olive oil. Heat over low heat just until the oil sizzles. Remove from the heat and let sit until cool, 20 minutes. Strain, discard the basil and reserve the basil oil. In the meantime, grill the corn, turning occasionally, until the corn husks are black and the corn kernels are light golden when the husk is pulled back, 6 to 10 minutes. Remove the husks and silk and discard. Cut the kernels from the cob and set aside. Brush the cut side of the tomatoes with 2 tablespoons basil oil. Place the cut side of the tomatoes on the grill, until the flesh blackens, 4 to 5 minutes. Turn the tomatoes and char on the other side, 1 minute. Remove and cut the tomatoes into 1-inch chunks and place the tomatoes and corn in a bowl. Add the remaining basil oil, red onion, vinegar, and thinly sliced basil. Season to taste with salt and pepper.

Oil the steaks and grill on one side until golden brown, 4 minutes. Turn the steaks, and continue to cook until medium rare, 4 minutes. Check with an instant-read thermometer to see that it registers to 130F. Remove from the heat and let sit 5 minutes before slicing. Remove from the grill and thinly slice the flank steak across the grain. Fan the steak onto a platter and top with the charred tomato and corn salad. Serve immediately.