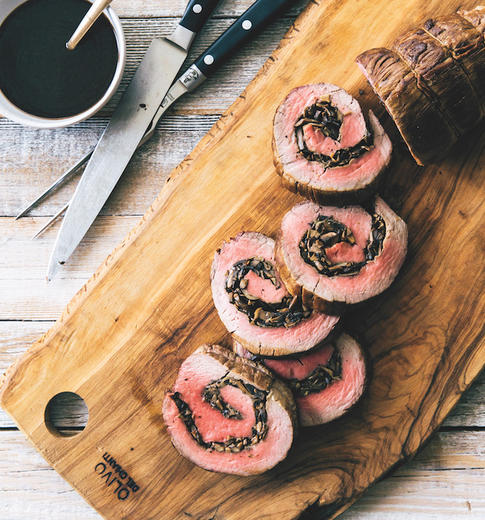 Place the dry porcini mushrooms in a small bowl and cover with 1 cup boiling water. When the water has cooled, strain and discard any sediment on the bottom of the bowl. Reserve the mushroom liquid and finely chop the porcini.

Place the tenderloin on a work surface and make a cut all the way down the long side of the tenderloin, approximately ½-inch deep. With a knife, follow the cut in a spiral manner to create a flat piece. Pound the tenderloin lightly to make an even thickness overall. Season with salt and pepper.

Warm the olive oil in a large frying pan over medium high heat. Add the garlic and cook until golden, 1 minute. Discard the garlic. Add the button mushrooms and cook, stirring occasionally, until they give off their liquid, 5 to 8 minutes. Add the chopped porcini and continue to cook until the liquid has evaporated, 3 minutes. Season with salt and pepper. Place the mushrooms on a baking sheet and let cool.

Spread the mushrooms evenly over the tenderloin, leaving ½-inch border around the edges. Roll the tenderloin and tie at 1-inch intervals with kitchen string. Season the outside with salt and pepper. Cut the beef across into two pieces. Preheat an oven to 400F. Warm the remaining 1 tablespoon olive oil in a large heavy oven-proof frying pan over high heat. Brown the beef until golden on all sides, 6 to 8 minutes.

Place the beef in the oven until an instant read thermometer registers 130F when inserted into the center of the meat. Remove from the oven and remove the beef from the pan. Cover loosely with foil and let rest 10 minutes. Do not discard the pan. Pour the excess fat from the pan and discard. Place the pan on high heat and add the red wine, scraping up the bits on the bottom of the pan, until it’s reduced by half. Add the mushroom liquid and stock and continue to cook until the sauce coats the back of a spoon. Remove the pan from the heat and add the butter and whisk vigorously until it is emulsified.

To serve, slice the tenderloin into 1/3-inch slices, removing the strings as you go. Place 2 to 3 slices of beef on each plate and spoon the sauce around the edges. Garnish with a small mound of herb salad (see below).