Peel the potatoes and cut them on a mandoline or by hand, into fine julienne strips.  Place the potatoes in a large bowl and cover them with several changes of cold water until the water is clear and no longer milky.  Let them soak for 1 hour.

Drain the potatoes and spin them dry in a salad spinner.  Toss with salt and pepper.  Melt 2 tablespoons of butter in a 10-inch non-stick pan set over medium high heat until it sizzles when you touch a potato to it.  Add one-third of the potatoes to the pan and make a flat cake in the bottom of the pan. Press the potato cake slightly with a smaller lid or spatula to form a flat cake the diameter of the bottom of the pan.  Cook the potatoes until golden on the bottom, 5 to 8 minutes.  Keep the heat high enough so that you hear a gentle sizzle and several times during the cooking, move the pan back and forth.  The potatoes are ready when the aroma changes from steamy to nutty.  To flip the cake, place a flat lid or plate over the pan and invert the pan.  Carefully slide the plate back into the pan.  Continue to cook the cake another 8 minutes or so, until it is thoroughly browned and crisp on the second side.  When it is done, transfer it to a warm paper towel-lined plate and place in a warm oven.  Repeat making two more potato cakes.

To serve, if the straw potato cakes have cooled, place them on a baking sheet and heat them until crispy and golden on the top shelf of a 500°F oven, 6 to 10 minutes.

Cut each straw potato cake into 4 wedges.  Place two wedges on each plate.  Place the crème fraiche in a bowl.  To thin slightly, add 1 tablespoon water.  Season with salt and pepper.  Top the straw potato cakes with the salmon, drizzle with crème fraiche, a dollop of caviar and chopped chives or green onions, dividing evenly among the 6 plates.  Serve immediately. 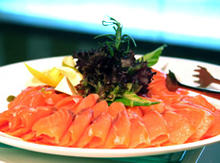