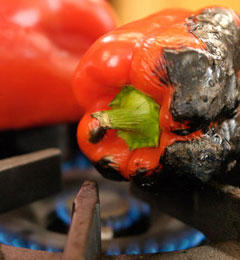 This frittata is the perfect example of how the simplest ingredients can come together to create the most mouth-watering dish. Inspired by the Spanish tortilla española, this frittata combines eggs with potatoes, roasted red peppers and red pepper flakes, all of which I always have on hand in my kitchen. Two simple steps, pan-frying the potatoes in olive oil and roasting the red peppers over an open flame, add a depth of flavor that elevates the frittata above its basic ingredients.

Peel the potatoes.  Cut them half way through the slice but when you get half way, turn and twist the knife so that the potato slices break off into very rough shapes or chips.

Heat the oil in a 8 to 9-inch non-stick skillet over medium heat and add the potatoes.  There should be space in between the potatoes because of the angles and the way they were cut. Cook the potatoes slowly, lifting and turning the potatoes occasionally, until they are tender but not brown.

Meanwhile beat the eggs and crushed red pepper  with the salt and pepper in a bowl with a fork until they are slightly foamy.

Remove the potatoes from the skillet by draining them in a colander reserving 2 tablespoons of the oil.  Add the potatoes and roasted peppers to the beaten eggs, pressing the potatoes down so that they are completely covered by the egg.  Let the mixture stand for 15 minutes.

Heat the 2 tablespoons of reserved oil in a large skillet until very hot.  Add the potato and egg mixture, rapidly spreading it out in the skillet with a spatula.  Using a fork, loosen the edges and let the runny egg roll underneath.  Continue to cook until the tortilla is almost set and the bottom is golden brown, 8 to 12 minutes.  Invert a plate, a little larger than the   circumference of the pan onto the top of the pan and turn the tortilla onto the plate.  Add the remaining 1 tablespoon olive oil to the pan and slide the tortilla back into the skillet.  Cook until the tortilla is cooked through, 4 to 6 minutes.  It should be slightly juicy inside.

In a bowl, whisk together the vinegar and extra virgin olive oil.  Season with salt and pepper.  Toss with the micro greens

Place the tortilla on a platter and cut into wedges.  Top with the salad and serve hot or at room temperature.