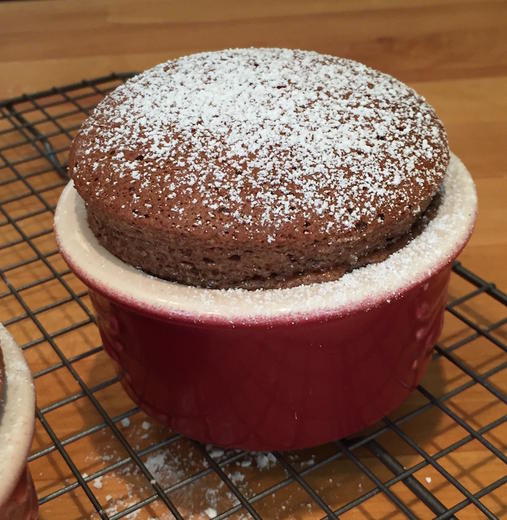 When my Tapas and Tequila Cooking Class made these souffles, they were a bit nervous that they wouldn't turn out well.  The recipe has several steps and each one of them can seem a bit daunting.  But were they surprised when they came out of the oven, all puffed and gorgeous!  And then we tasted and I think a few of us were close to swooning!  Serve these to people you love and wait for the applause.

Preheat over to 350° F.  Butter eight  12 ounce ramekins and coat lightly with sugar.  Whisk the egg yolks into the lukewarm chocolate base.  Using an electric mixer, beat the egg whites and cream of tartar in large bowl until stiff peaks form.  Fold egg whites into the chocolate base in three additions.  Divide the soufflé mixture among prepared ramekins and place on a baking sheet.  Bake until puffed but still moist in center, about 15 minutes.

Serve immediately dusted with confectioner's sugar.  At the table, make a hole in the center of each soufflé and pour some of the Tequila-Chipotle Crème Anglaise into the center.

In a small saucepan, combine the milk, cream, sugar, vanilla bean, cinnamon stick, tequila, and diced chipotle.  Over medium-low heat, bring to a scald.  Remove from the  heat and let steep 15 minutes.  Whisk together the yolks in a medium sized bowl to break them up.  Slowly add the hot cream mixture into yolk mixture, whisking constantly.

Pour the mixture into the saucepan again.  Cook over medium low heat, stirring constantly, until the custard begins to coat the back of a spoon  and the temperature of the sauce is 170°F when you check it with an instant read thermometer.

Strain immediately into a clean bowl and immediately whisk to incorporate some cool air.  Allow it to cool for at least 30 minutes before serving.  If you are not using it immediately, cover the bowl with plastic wrap and refrigerate.  Bring it to room temperature just before serving.